Skip to content
Earlier this summer, we blew the lid off of Australia’s best-kept secret, Brisbane-based alternative rock band Violent Soho. The band has been on fire as of late; from chart-climbing hit singles to having their entire headlining tour completely sell out in advance, including multiple dates in each city! Needless to say, it’s about time we catch up to what Australians have been tuned into for years.

Today marks the official launch of the U.S. pre-order for Violent Soho’s groundbreaking album Hungry Ghost, out September 30, along with their video for “In The Aisle” onThe A.V. Club. Directed by Tristan Houghton, the video follows a proud and confident naked dude as he cycles throughout Brisbane in an attempt to spread his pro-nudism message. Despite it’s mature and potentially NSFW content (don’t worry, it’s all blurred out) , it’s an undeniably charming and fitting video for the song, which explores the struggle that anyone living outside of the norm might feel.
Pre-order Hungry Ghost here:
http://store.sideonedummy.com/bands/violentsoho.html

Watch “In The Aisle” via The A.V. Club below:
http://www.avclub.com/article/violent-soho-intends-take-america-storm-nude-bike–207482 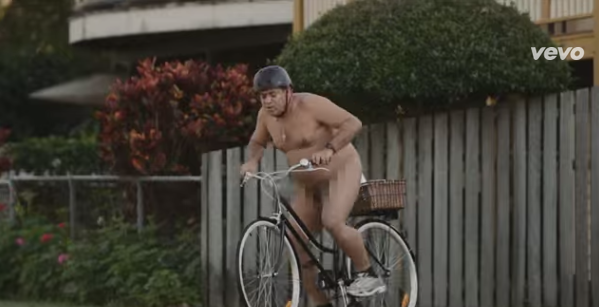 Produced by Bryce Moorhead (“the Steve Albini of Brisbane”), the songs that wound up on Hungry Ghost (originally released by IOHYOU in Australia) are bound to excite the masses here in the states, too. Whether it’s the throat-tearing chorus of “Covered in Chrome” or the lush melody of “Saramona Said”, the album is loaded with unforgettable hooks, headbang-for-days riffs and sing-a-longs worthy of rock’s gnarliest moments from down under.