It’s the moment a whole bunch of you have been waiting for… Andrew Jackson Jihad is currently streaming their entire new album, Christmas Island, via The A.V. Club!!

Check it out here: http://s1dm.my/AJJAVClub

And if you haven’t seen it yet, please watch their new video for “Temple Grandin,” if not for us then do it for yourself, man. It’s quite the spectacle and that’s all we’re gonna say on the matter: http://s1dm.my/AJJTempleGrandin

Don’t miss AJJ when they hit the road this summer w/ Cheap Girls, Hard Girls and Dogbreth! A bunch of these shows, if not all, will likely sell out so I dk, maybe you should pick up some tickets before you’re left in Tickeyfly’s dust or something…

Filmed in Los Angeles, the “Temple Grandin” video is the brainchild of director/editor Joe Stakun, director of photography Eric Bader and producer Hannah Getz. This small, dare-we-say DIY team of 3 (along with their staff of incredibly helpful P.A.s, of course) took some of the more visual themes within the song and brought them to life on three massive projector screens in an L.A. soundstage.

“There’s a Moon Man in Joe Stakun’s future for sure,” said singer/guitarist Sean Bonnette. “This video is the perfect visual representation of Temple Grandin. We loved every minute of making it.”

Christmas Island comes out May 6. To pre-order, please visit: http://onchristmasisland.com

With just two short weeks to go until the May 6 release of Andrew Jackson Jihad’s new album, Christmas Island, the band is currently streaming a more somber offering called “Linda Ronstadt” via IMPOSE.

In the month since announcing their signing to SideOneDummy, Andrew Jackson Jihad have unleashed 2 new songs from Christmas Island into the world. Noisey first called debut single “Children Of God” a jaw-dropper and boldly declared that Christmas Island has “album of the year written all over it,” while Consequence Of Sound raved about “Kokopelli Face Tattoo” as “one of the fuzzier offerings” on the album but “still containing all the elements of a great AJJ song.”

Pre-orders for Christmas Island are available here:
http://www.onchristmasisland.com
http://s1dm.my/xmasislanditunesOh… did we mention they’re going on tour this summer?! 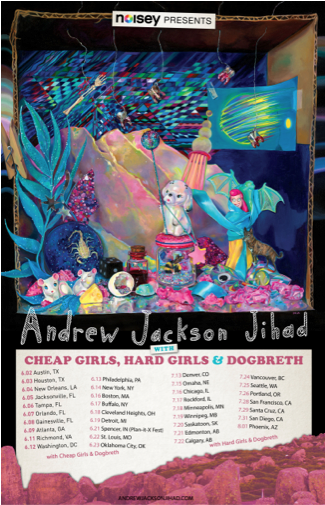 Happy release day to our Canadian brothers, PUP! We know we say we’re stoked all the time, and that’s because we are, but we’re REALLY stoked to finally have this record out across the world.

Sometime last summer, one of the brilliant minds here at S1D (hi, Kenny) sent around an album by a band called PUP. We were immediately hooked. We started playing the record several times a day and after hearing about how insane their performance at CMJ was, we knew they were a perfect fit.

Fast forward to today and we’re proud to be releasing their incredible debut album. Full of unforgettable hooks and unbridled energy, PUP’s self-titled debut will go down as one of our favorite SideOneDummy releases and hope you all enjoy it!

And check out some of the great things people are saying about PUP:

“A perfect ten… by the laws of Pitchfork’s nerdy algebraic backroom formula, it should receive a 10.0. On The A.V. Club’s elementary school-style letter grading system, it merits an A+.”
– Noisey

“With a beer in hand and an irreverent middle finger on the other, PUP makes punk rock effortless.”
– Consequence Of Sound

“It’s a tricky balance between aggression and pop, and they get it just right.”
–  Stereogum

“They have been able to take their melting pot of influences and craft a genre-hopping record that never has a dull moment.”
– Made Of Chalk

Head over to Consequence Of Sound today to hear an exclusive stream of a new (ish) Andrew Jackson Jihad song called “Kokopelli Face Tattoo.” Spoiler alert: it’s pretty awesome and one of our favorites from CHRISTMAS ISLAND, their new album coming out May 6!!

And some of them come with this remarkable creation called THE SNUGLY:

Oh, and don’t forget about the first new song from CHRISTMAS ISLAND, “Children Of God.” You can and should go listen to it right now. In fact, listen it to multiple times today. It’s scientifically proven to make your day better.

A few weeks ago, PUP hung out at The Rat Cave in Brooklyn to record this incredibly heavy Daytrotter session.

“These songs are spectacular flourishes of what it feels like to take the piss out of a bad hand and reshuffle, with a big grin on their faces and sweat dripping down onto the cards.” 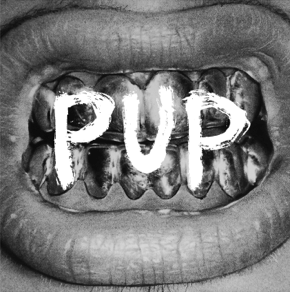 And New Yorkers, get stoked. PUP is playing a killer record release show next Saturday April 12 at Brooklyn Night Bazaar with Big Ups and Hunters! You can all thank the folks at Village Voice + Seaport Music NYC for this one…

And duh, they’re going on tour with The Menzingers this summer! Did you already forget?!

File this under “THINGS WE’RE INCREDIBLY STOKED FOR”

Our boys PUP will be going on tour with The Menzingers, Lemuria and Cayetana!! The dates start on May 29 in Providence, RI and wrap up on July 6 in Baltimore, MD. Tickets can be purchased here: http://themenzingers.com/TOUR/

And in case you’ve been living under a rock, PUP’s new album comes out next week (!!!) but you can stream it at Noisey RIGHT NOW: http://s1dm.my/1gHN77k. Apparently Dan Ozzi liked the album but we’re not sure?? JK he loved it and we know this.

You can still buy the album along with some rad pre-order items here: http://s1dm.my/PUP_PUP

OR if iTunes is more your thing, this link was made for you: http://s1dm.my/PUP_iTunes

WATCH their new video for “Lionheart” below: